The first test I wanted to perform involved a photo comparison between GoPro Hero 3 Black Edition and my own DSLR camera. I wanted see what kind of coverage the GoPro was capable of. So far, I've been very impressed with the results. 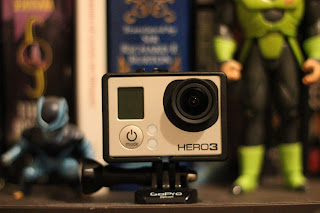 The GoPro excels at being a wide-angle lens camera. While some distortion issues do come into play (more on that in a second), the camera can cover a massive amount of space, making it perfect for any kind of landscape shots.

The quality, while lacking in comparison to a DSLR, still exceeds or rivals many consumer cameras, maxing out at 12 megapixels.

Now, let's compare some test shots. Keep in mind that the GoPro Hero 3, being an HD device, recommends at least a class 10 microSD card, if you wish get the maximum quality. Any less and you can expect deterioration in the photo/video quality, since lesser class cards aren't capable of holding the amount of data required for consecutive HD materials.

With that in mind, I must admit that, at the time of this test, I had my microSD card on order, awaiting its arrival. In the meantime, I was using a much older card, which was only capable of standard definition photos and recording, so we will not be factoring in photo quality for this test.

As a reference point, here is photo taken by a standard 50mm lens: 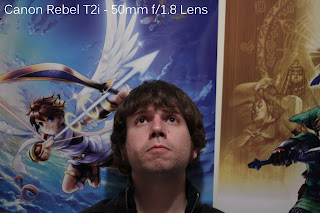 Now, comparing this to a wide-angle lens would be like comparing apples and oranges, but bear with me, this is just being used as a reference to compare the major differences.

Alright, here's the GoPro, taken from the same point as the previous still: 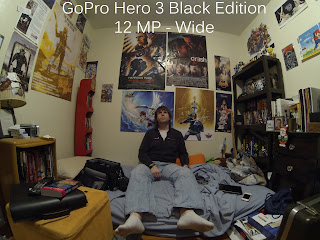 The amount of coverage from this little device simply amazes me. As you can tell, there is a barrel distortion, which is very common in fisheye lenses. While this effect can be useful in some situations, it can also be an issue for those who wish to have a more natural effect in their photos/videos. However, I have learned that is a fairly easy fix in post software. There are plenty of tutorials online that show you how to make that correction in your favorite photo/video editing environment. I'll have a small tutorial in the near future.

Next I plan to take the GoPro on the road and start some video testing. Hopefully, I'll have all the proper accessories at that point. See you soon!
Posted by secroner at 12:28 PM