When your abilities as an artist evolve, your tools of the trade tend to evolve with it. For two solid years, I operated a prosumer Canon EOS Rebel T2i. It had its perks. It was cheap and well-rounded. But, it also had its downfalls. The crop sensor and limited depth and quality were beginning to cripple my work as a professional. At that point, in early 2013, I knew it was time for an upgrade.

Nearly a year ago, I purchased the Canon EOS 6D as a replacement for the faithful but lacking Canon EOS Rebel T2i. The T2i helped to shape my skills as a photographer and videographer, but I knew I needed something with better quality and more features, if I wanted to prove that I was serious about my career. Thus began the search for a DSLR that provided a quality experience at the right price.

At that time, the big seller was the Canon EOS 5D Mark III, a greatly overhauled version of the Mark II. It was everything I needed to get the job done. However, the price tag said
otherwise. It just wasn't in my budget, so I went back to the drawing board and began researching alternate solutions. The Mark II proved to be a lot cheaper, but it was a dated piece of technology. It has been on the market for over five years, and from the comparisons to newer models, it was definitely showing its age. The tech market changes and grows at a rapid rate, thanks to scientific advances. Just recently, 4K cameras have become all the rage, meaning that I'm already behind on the times. But, that's the risk you take when you purchase tech, and that's why I knew the Mark II was likely near its deathbed.

I didn't want to drop money on technology that was almost obsolete, so I dug a bit further. That's when I discovered the Canon EOS 6D. It was not quite up to par with the Mark III, but this camera still held its own and fit into my budget perfectly. Since it was brand new to the market, I knew that it would last for many years to come. Or at least until I decide to cave and get something with 4K resolution. After doing a lot of research, I discovered that specifications and features of the 6D trumped the 5D Mark II in every way. It took some top-notch detective work to track down some of the specifications and how they held up against other cameras on the market. 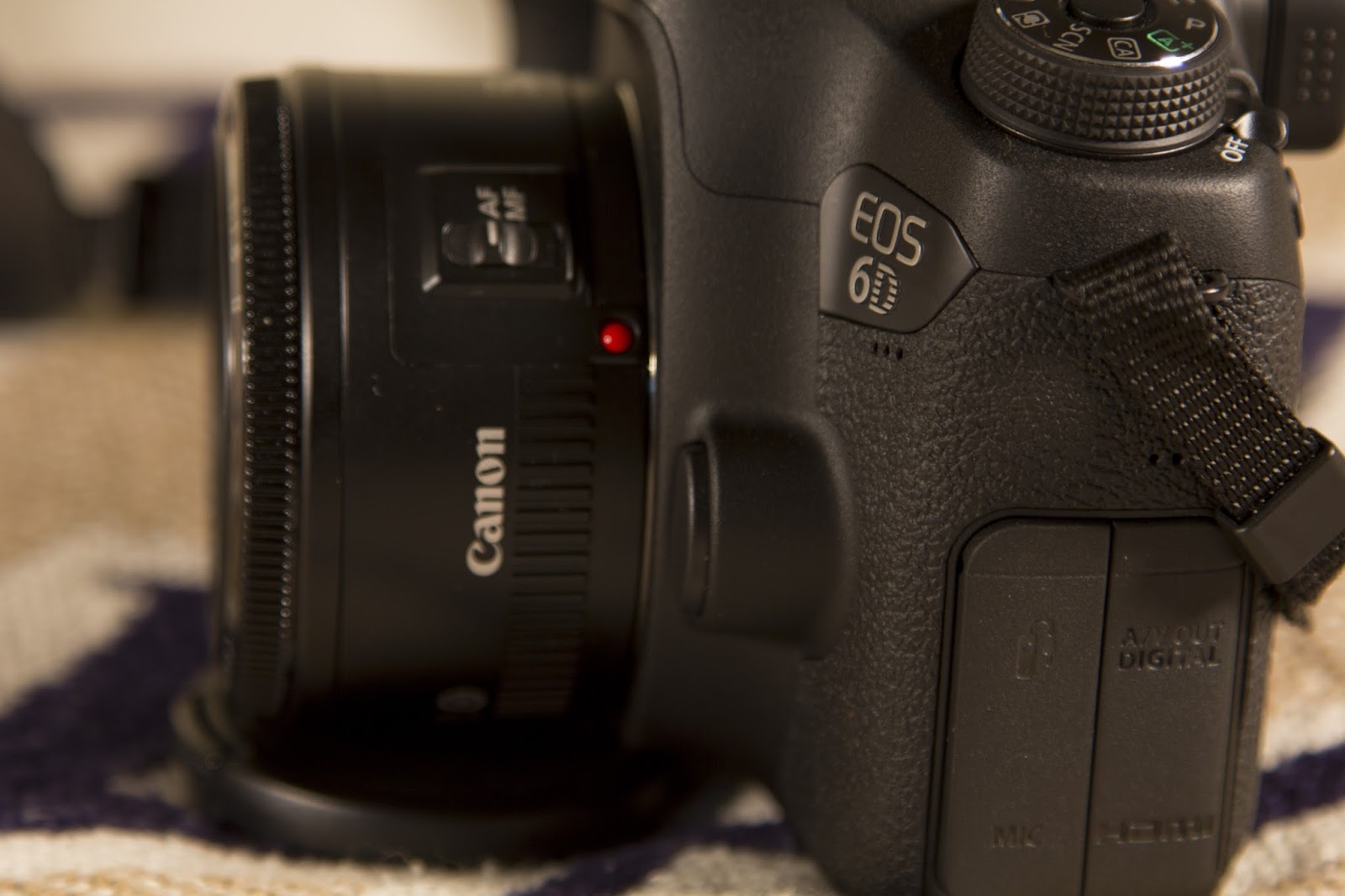 The Canon EOS 6D was released in late November, 2012. This DSLR sported many of the features of other full-frame models, but at a more affordable price. You have the choice to purchase either just the body for about $2100 or a package that also includes the EF 24-105mm f/4L IS USM zoom lens for about $2900. If you do a little price researching, you have a chance of finding the camera for even less. In my case, I was able to purchase a "like-new" (opened, but never used) body for about $500 less.

The 6D includes all the essentials of a prosumer DSLR camera: versatile still options for every type of photographer and movie recording for newbie film buffs. The 6D is capable of producing a resolution of 20.2 megapixels, containing a standard CMOS optical sensor and covering a full (1.0) field of view crop factor. Although, in comparison to other models on the market, the resolution was a bit lacking, but the image and video quality doesn't seem to suffer. 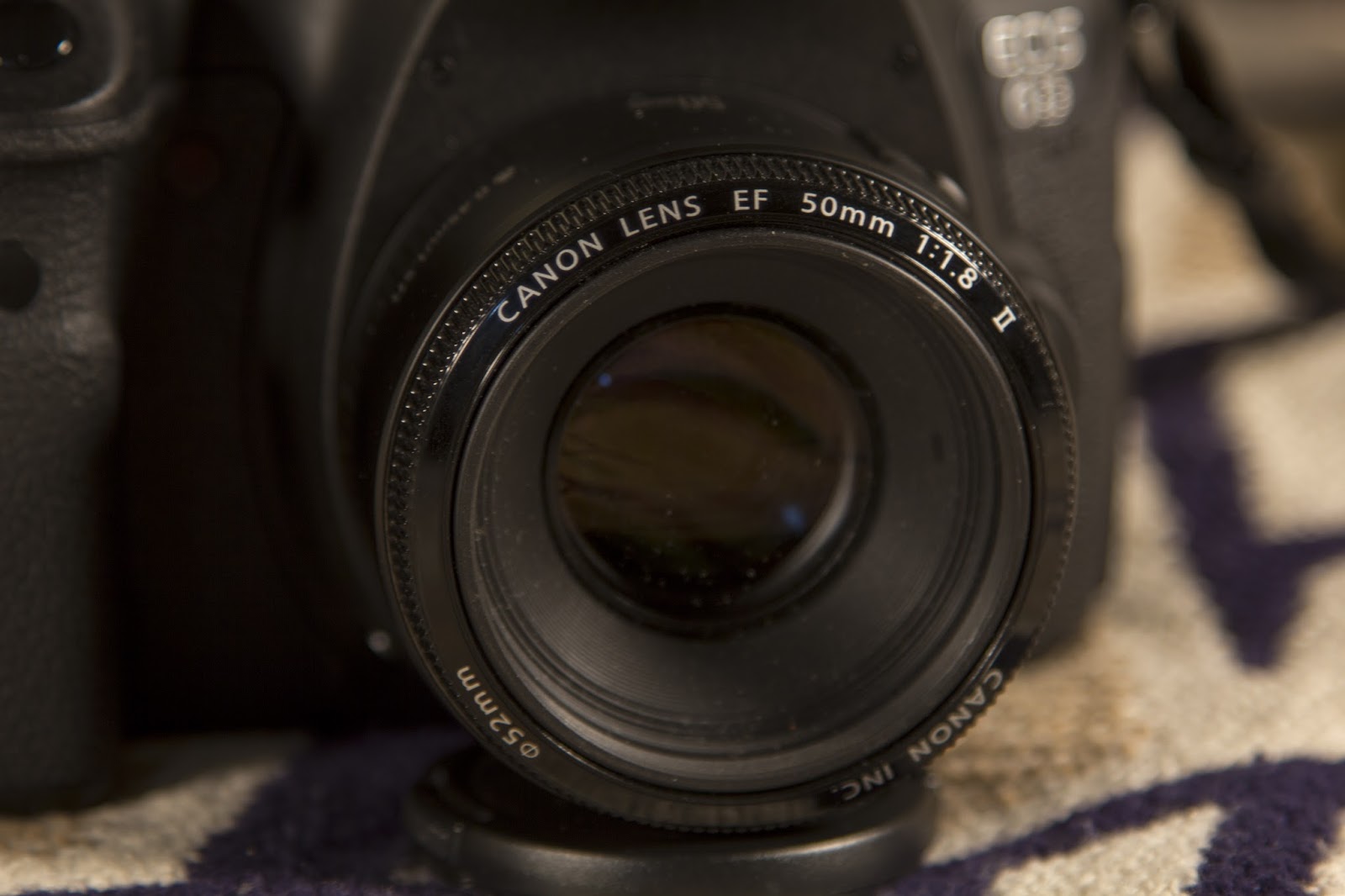 Image recording formats for the Canon EOS 6D include the standard JPEG, RAW, and the option to record both simultaneously. Videos can be recorded in H.264 and MOV formats with a max video resolution of 1920 X 1080. Unfortunately, image/video storage is limited to a single SD card slot on the 6D. If you're a Compact Flash purist, this might not be the camera for you. It's also unfortunate that video files cannot be recorded in a RAW format. There are always Magic Lantern modifications to make this a reality, but the 6D's lack of Compact Flash compatibility makes it impossible to record full HD RAW footage with the slower read/write speeds of an SD card. 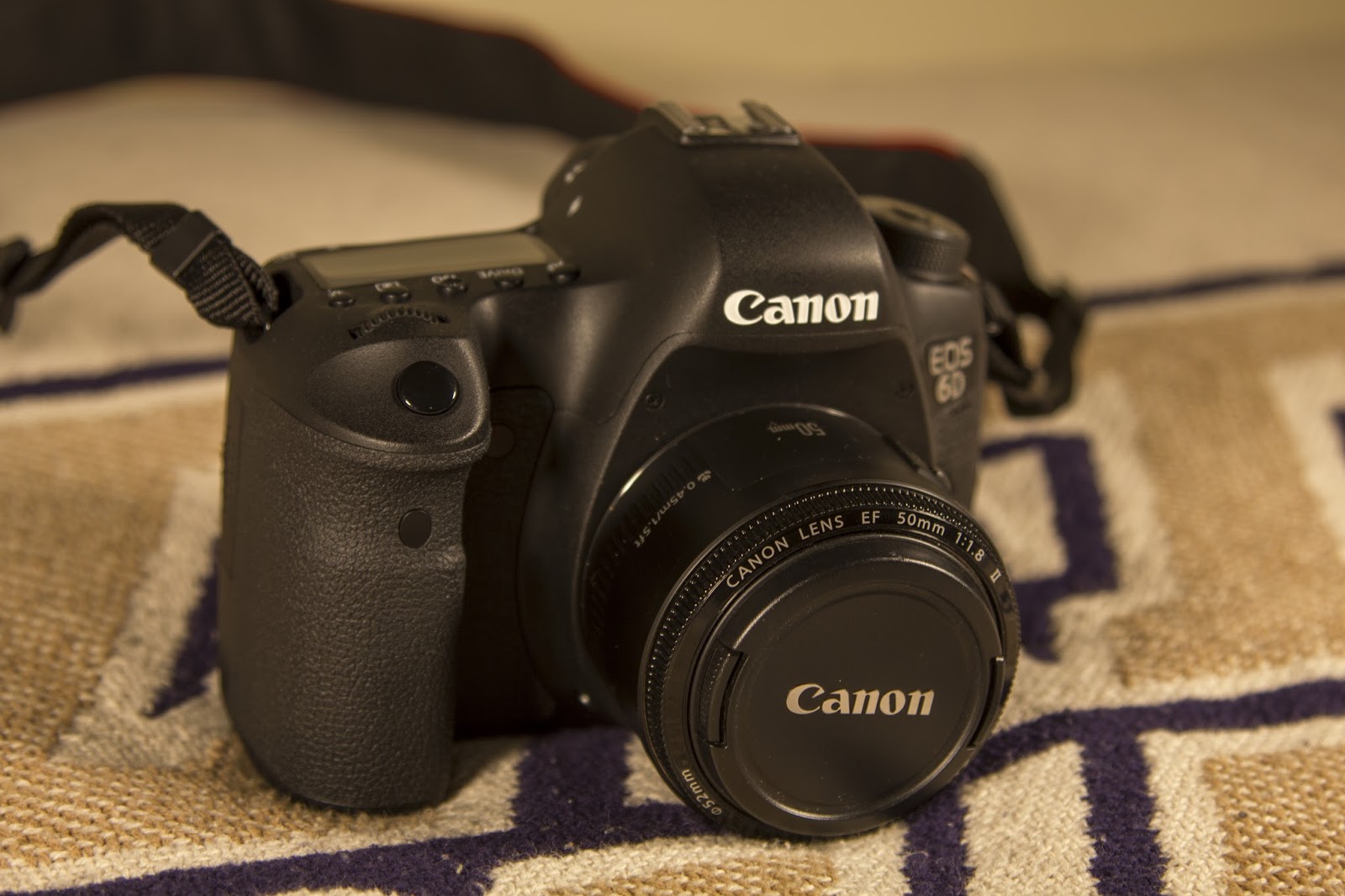 In terms of physical appearance, the Canon EOS 6D is very small compared to other DSLR cameras in its price range. It measures 5.7 inches in width, 4.4 inches in height, and 2.8 inches in depth. The back contains a 3 inch LCD display, which is only slightly smaller than the display on the Mark III. Despite the small size, the 6D is very comfortable in my grip. It can feel a bit awkward at first, but you tend to get used to the grip with time. The body is very light, however heavier lenses make the weight distribution noticeably uneven. Along with standard DSLR features and camera modes, it also includes HDMI (mini), composite video/audio, mini USB, microphone (auxiliary), and remote control connectors. It also supports the LP-E6 Li-ion battery, which is a standard battery for most moderately priced Canon cameras.

After completion of my research and comparisons, I purchased the 6D. When the camera arrived at my door, I immediately started looking at the differences between the 6D and my Canon EOS Rebel T2i. Of course, my T2i dwarfed in comparison to the 6D. I was very impressed by the results, but I needed to take the camera for a real test ride. And the only way to accomplish that was through scheduling and planning several work ventures.

The first few projects involved simple nature and landscape stills. I took the camera out to Mammoth Park on the outskirts of Pittsburgh. There seemed to be the perfect amount of land, lighting, and scenery. Walking around on the trails, I got a lot of good shots, close and far. The sunset created a warm glow that allowed me to capture a very cinematic experience. The quality of the photos proved to be a lot richer, in comparison to those taken by the Canon EOS Rebel T2i. Unfortunately, I can't make any side-by-side comparisons, but you can see some of the differences in comparison to some of my older photography. 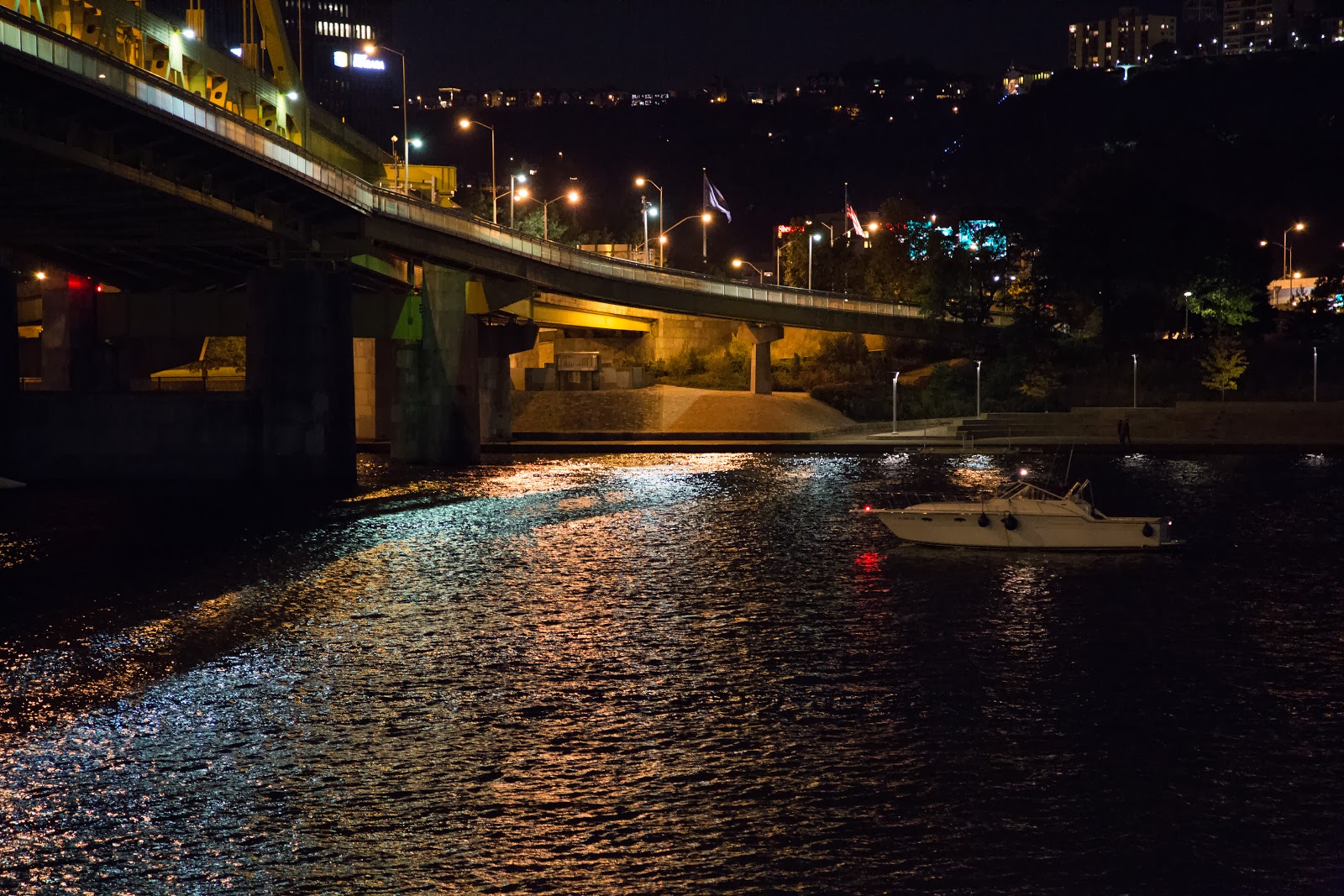 I had to take the Canon EOS 6D to some varying landscapes and discover another spectrum of this dynamic little machine. I found myself at The Point at the heart of Pittsburgh. The night cityscape has always felt like home to me, and the 6D created a level of surrealism that my eyes could never comprehend. The mix of the brightest and darkest areas shone through like nothing I've captured before. It was one of my most rewarding experiences in photography. I did have some trouble with capturing photos in the darker areas, but that was mostly due to Canon EOS EF 24-105mm f/4L IS USM. With the aperture only opening as wide as f/4, it was not an ideal lens to be using in low light situations. Whenever I decide to invest in a better lens, I will revisit this particular flaw. Despite this, the 6D compensated by providing providing ISO options for even the most dimly lit areas. Of course, the amount of noise in the photos was very obvious, but it was a surprise to see Canon creating compensation options for low lighting. 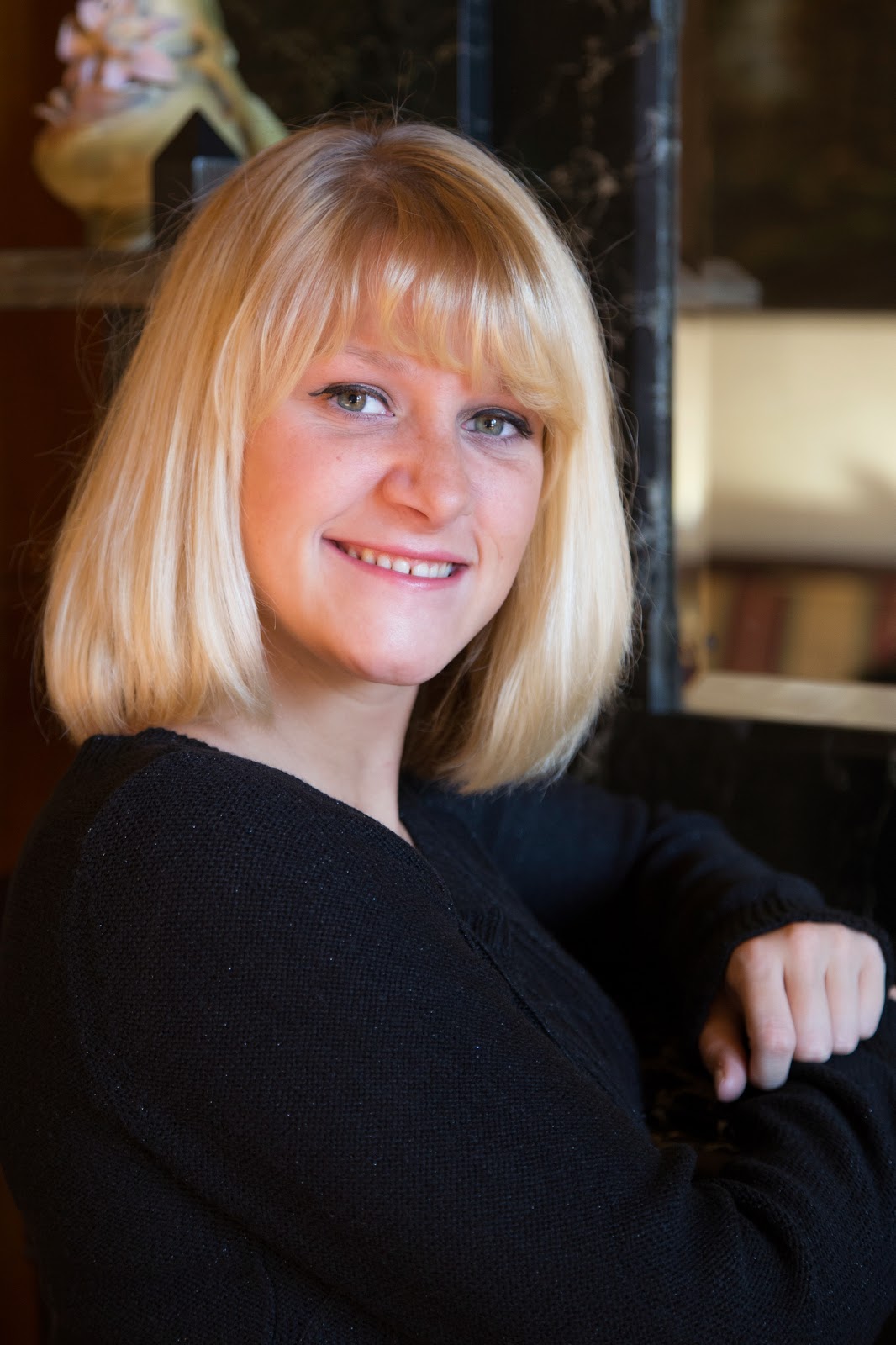 After my extensive field tests, I couldn't just stop at landscapes. As I've previously mentioned, I had the pleasure to work again with the lovely Victoria Bittner on some updated headshots. The wider range of color and shading, inside and outside, was beyond what I expected to see on a particular subject. Auto focusing was quick and way more responsive than any previous cameras that I have used. Outdoor lighting was not the most ideal for that day. Don't get me wrong. It was a beautiful day, but almost too beautiful. Too much direct sunlight can ruin a shoot. Luckily, there was plenty of cover for the shoot. The indoor stills were especially crisp, capturing detail and contrasting effects on a larger scale.

But the real challenge came with testing the video capabilities of the Canon EOS 6D. The controls, as always, were easy to handle. With the experience shooting videos on my Rebel T2i, I felt at home with the 6D. I got my first real field test from shooting 5 Minutes. With the proper lighting and camera adjustments, footage came out looking fantastic.  At 24 FPS, the high definition footage, in comparison to the Rebel T2i, was noticeably superior in terms of creating a cinematic feel. Obviously, this is no RED camera or five-figure cinema camera, but in terms of independent films, it gets the job done. I was especially impressed by the depth and level of detail captured by the camera in close-ups. It was as if I was missing something from every one of my videos prior to this shoot, and the 6D filled this void.

However, I did run into an issue with the recording. At various times during the film shoot, the camera would automatically stop recording on its own. This was especially frustrating when we had takes that contained perishable props and special effects that could only be done once or twice.  From what I have discovered, the issue was caused by two main factors: a file-size limiter set on the camera, which automatically stops recording if the video file reaches a certain size (I believe it's 4GB) and issues with overheating, which was likely caused by the non-stop shooting on our hot, cramped set.

Since then, the camera has held its own and travels with me on most trips, big or small. In recent days, I've learned to not rely on the camera for extended video recording session. It works much better with photography or film shoots. A camcorder would be my recommendation for event videography, which is why I recently purchased the Canon XA20...but that's another story.

Overall, my short journey with the Canon EOS 6D proved to be quite the learning experience. I know that I've only skimmed the surface, in terms of technical advantages and disadvantages, but I'm sure I'll update you with any new findings in the near future. The 6D continues to be a great option for photo and video, if the Canon EOS 5D Mark III is a little too far out of your price range. With the appropriate lens, the 6D is sharp, quick in response and features all the goodies and necessities of a professional DSLR camera.
Cheers!