"Many years in the making". That's one way to describe it. And a great way to pick up where I left off. After the venture that was 5 Minutes, my first 48 Hour Film Project, the majority of that crew were able to come back together to start filming the horror feature film Body Farm.

With some time away from my personal work, I felt this would be the perfect occasion to revive my
blog, in which I discuss my personal experiences in interests relating to media. Although I've been light on projects in recent times, I have stuck with this project to the very end.

In my sort-of absence from the "spotlight" (Does anyone actually read this blog?), I've made a lot of friends and done jobs that have led to bigger opportunities. I am still willing to help out a friend when they ask for an extra hand because I know I owe them for getting me to where I am today. To the people who have made that kind of impact in my life, thank you. You know I will always be there for you.

Five years out of college and I am still dipping my foot in the water that is the film and media community. Unfortunately, there are only so many hours in a day and I'm constantly caught in the crossroads of where to divide that time. I hope to be able to make more friends and help with other projects in the future because I've learned a lot along the way and I'm thankful for having the opportunity to be involved in so many people's passions through these short years in Pittsburgh.

One such passion is from my friend and colleague, Brandon Keenan. When we started working on Body Farm a few years ago, I was surprised that he chose me as his Director of Photography. Not because I felt I was incapable, but because I've never had someone place so much trust in me. He was asking me to tackle a project created strictly from his true passion. This was his baby and my lens was the eye that revealed his world to the audience. I was both excited and nervous to take up the challenge.

The crew that was assembled came from different backgrounds, and we worked to use those backgrounds as our strengths on the project. Once we hit our stride, the shoots became second nature to us and the process smoothed over time.

Nick LaMantia of Nickel 17 Productions came on board as an additional producer to help iron out some of the areas that we were a little wrinkled in. There was also Tim Roberts, who has such an extensive background in camera work that he became my most valuable asset with camera operations, shot setup, set lighting, and other important details behind the camera. With sound, we found the talented Mr. Dave Majcher.

Finally, I can't go without mentioning Kevin Hejna, who kept us all in line and on schedule during the shoot. This wouldn't have been possible without all of his hard work and dedication.

Of course, these are not the only talents involved with producing this monster. There are far too many people to name. Even those who may have only helped for a day were integral to the whole process. I want to thank each and every one of you for your assistance. We couldn't have done this without you.

What made this production work so well was the fine-tuned engine that was the cast and crew's relationship on set. We knew the right moments to be serious, communicate, and work through shots, yet at the same time, there was never any tension when working on this set. We all became close friends and colleagues and we had a lot of fun every day we shot.

Sure, it could get stressful sometimes. That comes with any film production. But we knew how to work around the tough parts and stay well connected with each other.

Now we have gone into post-production, with process quickly moving to the next step. Brandon has been editing as we shoot, expediting the process, and he continues to edit as I am writing this, working quickly through the process to create the best possible product.

More will come once the process is complete. I will keep writing on my personal projects as well. Oh, and the name change. I forgot to mention that. I chose "Cipher Eye Selfie" as a running joke on the set of 'Body Farm' and the selfies I would post on Instagram from the set. I felt the slight name was appropriate for the soft reboot of this blog. Hopefully, this will be the last soft reboot I will have to do in a while.

Take care and talk to you again soon. 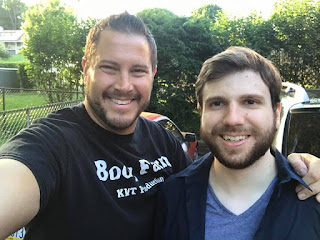 Posted by secroner at 8:16 PM No comments: