So, I worked on a film this summer. It was a bloody mess. Just an absolute bloody mess. It was absolutely horrifying...oh, let me clarify. I'm talking about film CONTENT, not the film itself, nor the production. The shoot was fantastic. The cast and crew were fantastic. The overall experience was fan-freakin'-tastic! 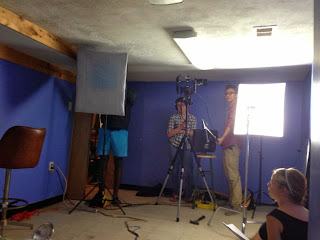 What started out as a three day contest evolved into something greater. We signed up for the 48 Hour Film Project, not knowing what we would be getting ourselves into.

The project had to be written, shot, edited, and submitted within 48 hours (hence the name of the contest). We began our weekend of filming on a Friday night, where our team, Suture Films, arrived at Chatham University, the central hub of this weekend event. There, we drew our film genre from a hat, noted the requirements of the short film, and went on our merry way.


We ended up drawing horror. Though this was my first horror film, I embraced the opportunity to try something new. We went back to our set, where our team of writers cranked out a script, while the rest of us prepared the set for the shoot. By the end of Friday night, all the preparations were complete. We were ready to start filming, and the title of the film was chosen: "5 Minutes..."

The shoot officially kicked off the next day. Drenched with special effect goodness, we shot and
experimented until we were all bloodied (all fake, of course) and sweaty (it was HOT on the set). Though we were pressed for time, due to a few scheduling conflicts, we were still able to get what we needed and wrap by the end of the day. Things were looking good. Really good.

Then day three came. Sunday was dedicated to editing. We did run into some trouble with the process, but we were still able to submit something by the deadline that day. Unfortunately, we decided that the final product still needed some work, so we decided to pull the film from the 48HFP screening.

We figured that everyone worked so hard on the project, we wanted to release the best possible product. We wanted our contributors to be proud to say that they worked on this production. So, we decided to take our time and spend the next few months recutting the footage until we had something that we could all be proud of. Several days ago, our latest edit went live (embedded below).

I am very happy with the results. Since it is the perfect season for the horror genre, this is the perfect time to unveil a project that all of us put a lot into.

With the release of our film, I would like to take this opportunity to thank everyone who was involved in the film. You guys did a great job and showed a level of passion and professionalism that I have never seen before. I would also like to give a shout-out to all my Juniata colleagues that assisted in the production. You guys did a fantastic job and made the production a wonderful experience! That goes for the rest of the cast and crew! You guys made it possible to make a dream come true: to produce my own film! You have all my appreciation and respect. You are all a very talented group and I hope to work with you all again!

I would also like to take this opportunity to thank all of our supporters of this project! You guys helped us to move forward with this project and strive to make something that you would all love. We hope that you all enjoy watching this film as much as we enjoyed making it!

Next, we will be looking to polish the film and begin screening it in a few festivals and contests. Stay tuned for any future updates! Thanks again for all of your love and support! Cheers!

And here it is folks! It's the moment you've all been waiting for: 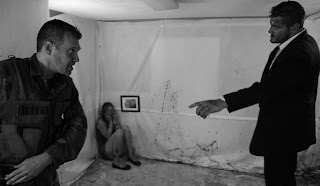